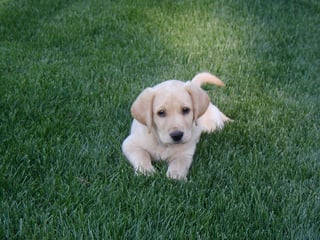 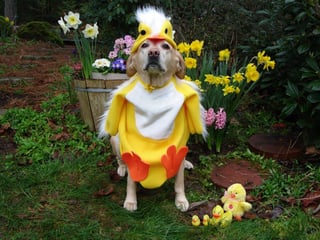 Mollie came to the office with me from the start. Since Rick was in Alaska when I picked her out, I wasn’t comfortable leaving her with the other Labs we had. And then Mollie didn’t ever stop coming to the office; I just couldn’t part with her. She slept most of the days in a wide fenced area we made for her in my office, rarely had accidents in the office, and was just so sweet. She visited folks who took classes from us, and techs would come in to pick her up and take her off to their desk, saying, “I need a Mollie moment.” Wherever I went, Mollie went: To the office or on-site appointments (she always stayed in the car, but she was almost always with me unless the weather was too hot for her to be in the car). Mollie became my constant companion.

I’ve said this before, but I’ve never had a dog as loyal as Mollie. She didn’t like it when I was out of her view, and truthfully, I rarely ever was. I took her everywhere with me and talked to her all the time.

She was five months old when we decided to send a postcard out to our clients to let them know about a new version of Sage Software that was coming out. One of the ERP techs suggested that I dress her up as Sherlock Bones and send her out on one side of the postcard. And that’s how the “Mollie Cards” came to be. Mollie was terrified the first time we dressed her up – she was shaking like a leaf. But then we did another card, and another card, and pretty soon Mollie knew her job was not only to be with “The Boss Lady” but to pose for our postcards and Christmas Cards as well. 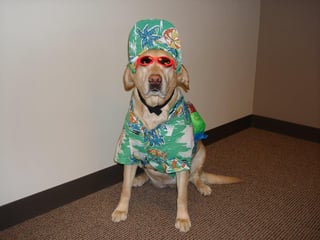 When Mollie was just over two years year old, the staff made a surprise calendar for me – just a large one sheet calendar that had all kinds of costumes on it. The costumes were the ones the staff had come up with and dressed Mollie in during those rare occurrences when she couldn’t go to an appointment with me. One day after I had been out at an appointment and came back to the office, the receptionist was missing and the entire office was silent. And Mollie’s collar was lying on the floor. I thought that was odd. As I rounded the corner, Mollie came barreling around it at the same time. I didn’t think much more about it – until the staff presented me with the calendar at our fiscal year-end party. That’s when I found out they had taken any opportunity they could to do the photo shoots for the calendar. Apparently everyone had scattered different directions the day I came into the office and saw Mollie’s collar lying on the floor, as the staff were hiding costumes and trying to get the current costume off of Mollie before I could see it. Louann from Graphic Expressions was at the party and presented the calendar to me – Louann is the one who always printed our Mollie Cards, and she made that first “Mollie Calendar”. The calendar was so cute that I thought it would be fun to send it out as a Christmas present to all of our clients and CPA friends, and we did so the first year of the Mollie Calendar – which was 2005. Our clients loved it. Then, in December of 2005, folks started calling to ask when they were going to get their 2006 calendar. I attempted to explain that it was only a one year deal, and everyone said, “No, No. We want another!” Hence, the tradition of the annual Mollie Calendar began. And that tradition has continued for 11 years.

Mollie was incredible. She would let me dress her up in anything. She hated hats – she always ducked her head – but because I asked her to, she would wear them. And she would lift her paws up, one at a time, to be “dressed” in a costume. She would sit for as long as it took (or stand, in the case of the tree we fastened onto her at a Christmas tree lot!) until I told her it was okay. She was truly amazing - no matter what I dressed her in, she was patient and would do whatever I asked of her.

Mollie inherited her grandfather’s ailments, which included severe arthritis. The arthritis led to medication that caused liver issues, and we were constantly checking her liver over her last 4 years. We lost her last July - it’s been a year since her passing, and there isn’t a day that goes by that I don’t think about her. I miss her more than I can put into words. And I will always know how incredibly lucky I was to have her.

We made the Bennett/Porter calendar a transition calendar this year – honoring Mollie by dressing some of our staff’s canine companions in a few of Mollie’s previous costumes and putting Mollie’s original calendar picture in the corner of the page. It will always be “The Mollie Calendar” to me – even if Mollie is no longer in it. I think the staff did a great job with their pups and I’m sure everyone will enjoy seeing all of them.

Mollie was one of those once-in-a-lifetime companions, and I’ll never forget her. Folks tell me that she’s just waiting for me at the Rainbow Bridge, and somehow I know that’s true. I’m so anxious to see her again!